The First Female President Will Not Carry a Handbag

What would the first female president wear? 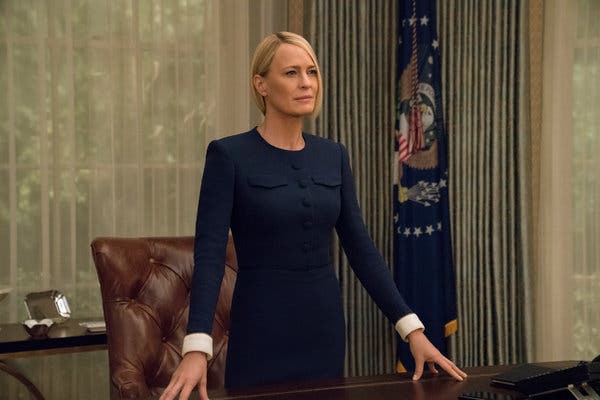 As Angela Merkel, erstwhile model of a modern female leader, prepares to step downas head of her party in Germany, and a wave of potential presidential candidatesemerges in the United States, like Elizabeth Warren, Kamala Harris and Kirsten Gillibrand, the question is worth considering. It speaks to what female leadership might look like in a new era, one less defined by trouser suits and bright fruit-bowl colors; one tailored for a different majority.

We may well have the answer in a few years, but for those who don’t want to wait, there is always “House of Cards.” The show has put a lot of thought into this.

Season 6 — a.k.a., the final season, and the one without Kevin Spacey as President Francis Underwood (he has been killed off, after Mr. Spacey was fired in the wake of sexual abuse allegations) — dropped on Friday with Claire Underwood (Robin Wright), the former vice president, in the Oval Office. The show is as dark and twisted as ever, both in terms of plot and the corrupting psychology of power, but it’s also a pretty convincing take on how the first Madam President might present herself.

Imagine the classic corporate suit and tie spliced with the style of a World War II Women’s Army Corps member, and topped by a dash of

“We obviously didn’t have a female president as a model, but I revisited the male American presidents of the past to look at their daily wear, their travel wear, and then thought about how that might translate to Claire,” said Kemal Harris, who is responsible for Ms. Wright’s wardrobe. (Jessica Wenger is the show’s head costume designer.) 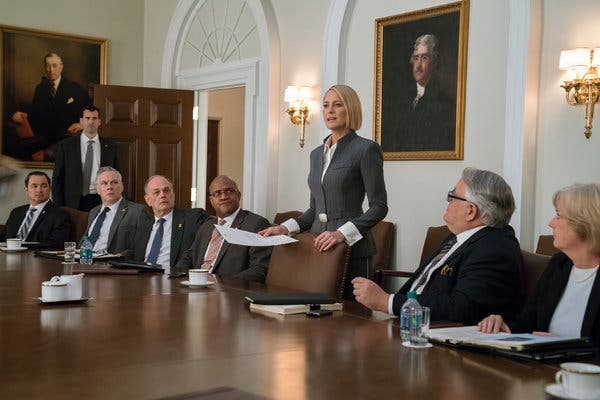 It began with colors: the blue that dominated ties in the Clinton and Obama administrations, army green, black and gray. Also tailoring: In a symbol of control over her environment, everything Ms. Wright’s character wears has been exactingly seamed to fit.

“Many presidents wear cuff links from the White House Gift Shop, so I wanted to get a pair for Claire,” Ms. Harris said. She contacted the gift shop (which was once run by the Secret Service but is now a separate for-profit business no longer affiliated with the executive branch) to ask if it had any samples that had never been used.

The gift shop’s director, Anthony Giannini, sent her a pair of prototypes given to him by a Secret Service agent, now retired, who had acquired them under Ronald Reagan. Never produced, they are slightly smaller than usual, more recessed and “elegant” and, according to Mr. Giannini, “the only ones of their kind.”

As a result, Ms. Wright wears a lot of shirts and dresses with French cuffs, the better to show them off.

“But you never see a male president with a briefcase or a wallet,” Ms. Harris said. “So even though I had a lot of designers reaching out to me to offer their new bags, I thought: ‘Claire is not carrying a bag. She has people for that. She’s president.’”

Indeed, for the first time in the series, fashion labels play a relatively small role in Ms. Wright’s wardrobe. (In the past they made up two-thirds of her clothes, with one-third designed especially for her.) The problem, Ms. Harris said, is that “a lot of stuff you see on the runway now is street wear, and it just didn’t translate.” She ended up making about 80 percent of Ms. Wright’s wardrobe herself, she said, with the tailor LaVonne Richards.

(Given the number of women currently running for office, that’s a significant lesson — and one that fashion itself might do well to note.)

The few brand names that do show up are CHLOÉ (“They do the perfect boot-cut trousers,” Ms. Harris said), Equipment (a button-down shirt) and, notably, Celine (a black satin trench from a recent Phoebe Philo collection that Claire wears as a kind of Ninja cover-up when she is spending time outside the White House).

“I bought it at Bergdorf and then had it streamlined because I knew it would transform her character,” Ms. Harris said. “It should be in a museum now.” 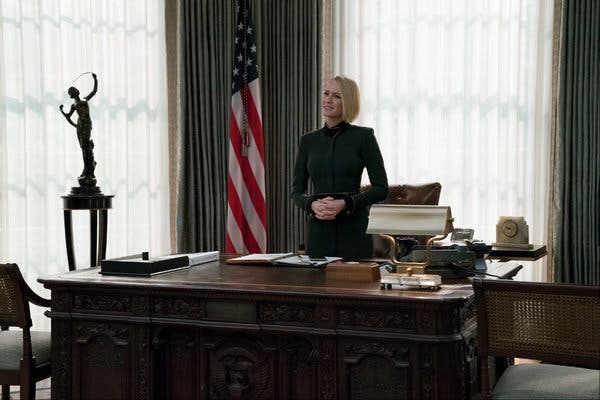 Unfortunately, political hopefuls looking to borrow Claire Underwood’s style probably can’t get that coat anymore, Philo-philes having gone into hoarder mode when the designer left the label earlier this year. And Ms. Harris said that the chances she would commercialize her efforts, step into the fashion gap and create a Claire Underwood-inspired product line à la “Kingsman” suits, were small to none.

Which is too bad, because what she came up with is interesting, in an understated, provocative way: a focus on high-neck, long-sleeve silhouettes, body aware but severe, often with epaulets or belts to evoke the military.

It’s not the classic power suit by any definition — the look is both too austere and too feminine for that — but label-less and logo-less as the wardrobe is, it is at once deceptively accessible and replete with the power of refusal.

That’s not a bad message, really, for someone with a nuclear football. The article appeared originally in the nytimes.com.