PARIS, France — “We’re a brand for the people,” said James Jebbia. The press-shy mastermind behind the streetwear label Supreme was sitting at a desk inside his spacious office on the 2nd floor of the company’s headquarters on Wooster Street in New York’s Soho as jazz quietly played in the background (a reminder that “A Love Supreme,” the brand’s first skate video, released in 1995, paid homage to the John Coltrane album of the same name). Flanked by colourful doodles by his two children, which he had taped to the wall, and a large framed piece by the graffiti artist Kaws, Jebbia was expressing his annoyance with online grumblings over the coming opening of a new Supreme boutique in Paris. “It’s funny, we get a lot of people bent out of shape who say, ‘Oh, these guys are going to fall off now that they’re opening in Paris.’ I’m not really concerned if people have this purist view of the New York Supreme thing,” he said, referring to the brand’s much-vaunted reputation as a consulate of downtown cool ever since it opened its doors in 1994 in a storefront on Lafayette Street. “If they think opening our shop in Paris is going to harm our brand, then we can’t really be that strong of a brand.”

Jebbia, a retail renegade who spent time at Stüssy and Parachute before building a scrappy skateboard lifestyle empire whose cultural capital now rivals that of any French luxury label, has never been content to rest on his laurels. Supreme’s new Paris store — a 1,100-square-foot space in the heart of the city’s Marais neighbourhood, which will showcase art installations by Mark Gonzales and the collage artist Weirdo Dave — is the 10th outpost in a retail network that now spans North America, Asia and Europe. (With the exception of Dover Street Market’s New York and Tokyo stores, the company does not wholesale). But global expansion poses something of an existential question for Supreme: how can the label continue to scale without watering down its homegrown cult appeal?

“I think a lot of people still want us to be this exclusive, precious brand, but we’re not at all,” Jebbia said. “It’s much more complex than that.” He has a calm, below-the-radar demeanour that’s reinforced by a soft English accent. (Having grown up primarily in Sussex, England, he moved to New York City “around ‘83, ‘84.”) Occasionally, there is an impassioned earnestness to his tone which suggests that even after two-plus decades in the game he still feels like something of a dark horse.

Of course, a powerful mix of exclusivity (the original flagship was once a clubhouse for underground artists like Harmony Korine and members of the influential graffiti crew Irak) and preciousness (Kermit the Frog starred in one of the brand’s advertising campaigns) is part of why metal police barricades are routinely required to fence in the frenzied customers who camp outside Supreme’s stores for each new product drop. “People think whatever we do, it sells out. But it’s not like that,” said Jebbia. “We can’t explain it, other than we have some really cool shit.” 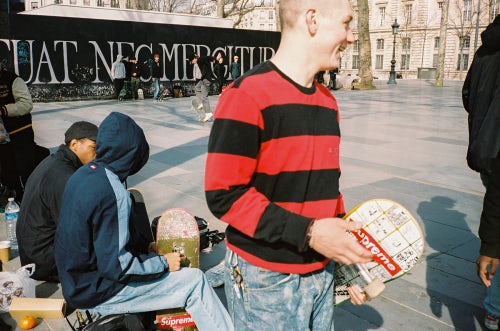 Supreme’s success is also linked to a muscular branding strategy grounded in a puritanical sense of hometown pride. Over the years, the store has sold skateboard decks featuring the work of New York art stars like Jeff Koons and Nate Lowman, low-fi skate videos directed by downtown filmmakers like William Strobeck and coveted t-shirts, hooded sweatshirts and flat-brimmed caps that reference city landmarks like the Apollo Theater or its iconic skyline. And despite the images of Rihanna, Kanye and Bieber wearing Supreme that circulate online, it’s a host of more rarefied New Yorkers, everyone from young painter Lucien Smith and veteran style writer Glenn O’Brien to Chloë Sevigny and Lou Reed, who have best served as brand ambassadors.

As the company’s business grew, some expected Supreme’s original Lafayette Street store to spawn boutiques in neighbouring hipster enclaves like the Lower East Side or the new retail playpens of Brooklyn. But the plan “was never to open six shops in New York,” Jebbia said. Instead, he steered the brand away from its home turf. In 1999, the company partnered with Ken Omura, a Japanese friend of Jebbia’s, to open its first international store in the Daikanyama neighbourhood of Tokyo, catering to the brand’s rapidly-growing Japanese fan base. Supreme now has five other retail stores in the region — in the Harajuku and Shibuya sections of Tokyo, as well as in Osaka, Fukuoka and Nagoya — which also compete with an underground economy of Japanese resellers who run emporiums full of painstakingly steam-pressed vintage Supreme pieces encased in plastic bags. The company’s Los Angeles outpost on North Fairfax Avenue, which houses a proper skate bowl, opened in 2004. And, in 2011, the store on Peter Street in London’s Soho became the brand’s first European flagship.

Yeah, we’re a New York brand, but we’re a world brand now, too. It’s no different than Levi’s being from San Francisco.

Finding success outside New York proved that the label’s homespun magnetism had legs far beyond what the insular world of Lafayette Street skaters initially appeared to suggest. “Yeah, we’re a New York brand, but we’re a world brand now, too,” Jebbia said. “It’s no different than Levi’s being from San Francisco. People might think there are a lot of brands in the world like ours, but there aren’t.”

Rather than your typical by-the-numbers retail rollout, Jebbia approaches expansion more like a touring rock star who knowingly alters each night’s set list to cater to the ear of a city. “I’ve seen a lot of brands fail because they went, ‘Hey, look, we’re from New York, and that’s what we’re all about.’ But wherever you go, people are proud of where they are,” he said. “So even though we’re from New York, what we do is a mindset: it’s got to work in Japan, in Los Angeles, London, wherever.”

But Jebbia’s approach is also highly pragmatic, guided by a mix of “instinct backed up with some real understanding of what we do.” For one, Jebbia often consults data from Supreme’s global e-commerce business to identify geographies and demographics which are most responsive to the brand’s ethos. “The Web is big for us,” he said. “Wherever we have shops, we do well on the web.” This means that, for North American sales, the top markets are New York and Los Angeles; for Europe, it’s London and Paris. “After seeing what we do online and everything, we’ve done pretty well in France,” he said. “I look at opening a shop in Paris as a ballsy move because we really believe we have an audience there, even though there are a lot of great shops there like APC, Colette and Chanel.” 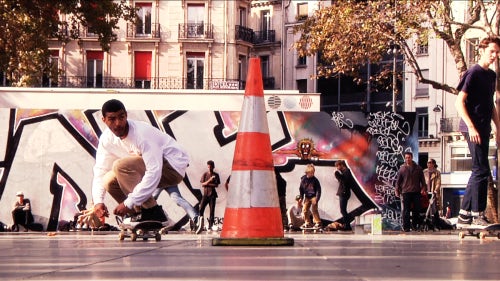 Several years ago, Jebbia was on a trip to Paris with his wife when he saw “a part of the city that I wasn’t really aware of.” Recent changes by the local city council to restrictions previously placed on skateboarding in places like the Place de la République, a sprawling eight-acre plaza peppered with ornate fountains and bronze statues, have transformed parts of Paris into vast playgrounds for a melting pot of skaters. “You couldn’t have that in New York,” Jebbia said admiringly. “It’s like having a great plaza where kids can skate all day on St. Marks or something. You might think there is more freedom in New York, San Francisco or London, but a kid can’t skate in those places without getting arrested.”

Jebbia said he typically hires from Supreme’s extended community of friends and family, including professional skateboarders and artists — even customers. His approach to staffing new stores is no different. “The people I work with is what gives the store its personality,” he said. “They treat it like it’s their own.” For the shop in London, Jebbia picked 1980s skate legend Dan Jagger to be its store manager. A similar approach guided his decision to ask Samir Krim, a founder of the French skateboard company Minutia, to manage the new Paris boutique. “He’s a big part of the skate scene there,” said Jebbia. “If we didn’t have someone like Samir, we wouldn’t have opened a shop in Paris.”

But building your global retail strategy around a worldwide family tree comes with constraints. “You can’t just click your fingers and have some decks,” said Jebbia. “We haven’t done a lot of stores simply because of man power.” It’s an unhurried philosophy that makes Supreme allergic to external investors hungry for rapid growth. Not that Jebbia is looking. “As a small brand, we do it all,” he said. “We don’t need an investor. We would never go anywhere or do anything where we feel it would compromise what we do.” Jebbia declined to disclose specific financial data on the size or growth of the company.

It’s perhaps not surprising that Supreme’s polished skater aesthetic has entered the global fashion lexicon. In his review of the men’s Autumn/Winter 2016 collections shown in Paris in January, The New York Times’ Guy Trebay described the “street-meets-luxury” look of collections from Hermès, Berluti and Dior Homme as channeling “the kind of utility garb the skate rats who hang out around Supreme tend to wear.” Meanwhile, Vetements, the industry’s current darling, is beloved for its Margiela-meets-streetwear aesthetic and the Russian-born designer Gosha Rubchinskiy has built a budding business on his uniquely Slavic take on the category of ‘90s skate clothes that Jebbia and his team helped to define. There is also the bevy of magazine editors and fashionable denizens of the Marais who now effortlessly mix streetwear favourites like Palace, Bianca Chandon and Supreme with Dries Van Noten and Isabel Marant.

For the most part, Jebbia welcomes fashion’s embrace of skate culture. “It’s a good thing, because before we were one of the only brands doing that kind of thing. Now it’s just more open and that’s great,” he said. “I think it’s cool because they’re making things people really want to wear. And that’s what we do: we make things people want to wear — not in fantasy land. Oftentimes you’ll see pictures from fashion shows and all the models outside the show in their real clothes are wearing brands like Supreme.”

But rest assured, Jebbia has no plans to assimilate. “I want to do something where a young kid shopping with his parents might be like, ‘Mum, maybe you shouldn’t come in this store with me.’”

The article was published in businessoffashion.com