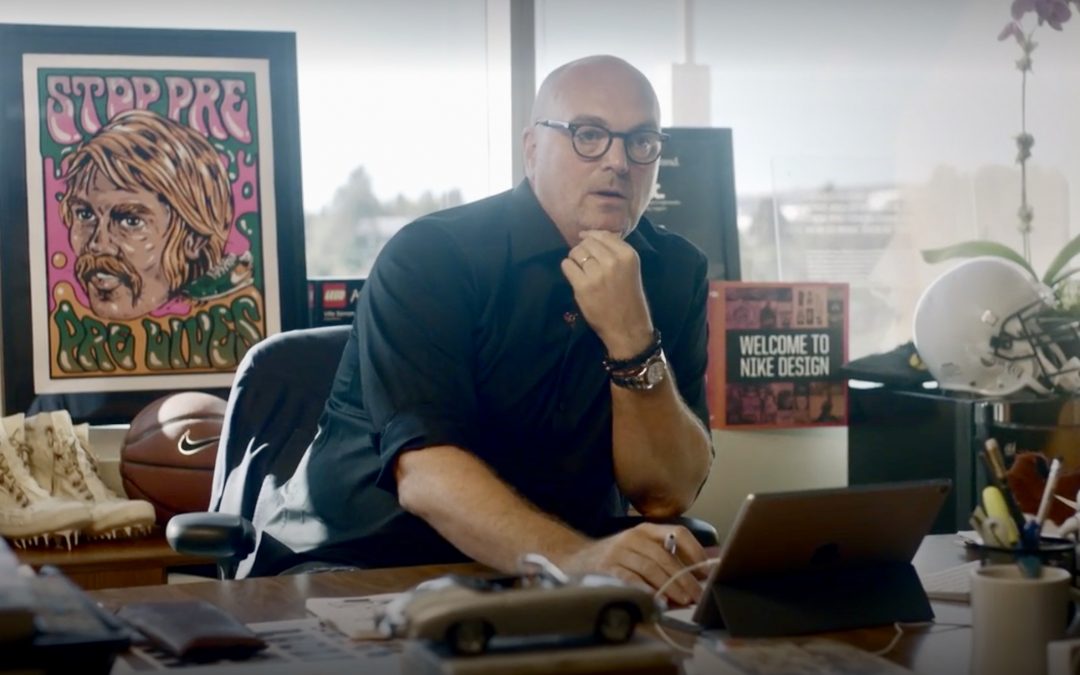 You have a lot of loose bits of paper and sketches in this office. What do you like to draw?

Sneakers, quick body sketches, architectural retail spaces. I’m dyslexic, so my first real language was drawing. Even at the youngest age I can recall, I wasn’t necessarily interested in the essay or the text, I was graphically designing the header. I doodled everything. That was the way I communicated.

I find that I listen better when my hand is busy. And I find that when I’m listening intently and I’m gesturally moving my pen, some interesting things come out. They’re not perfect, they’re not final, but they’re a glimpse of an idea. It helps me process, helps me stay focused. I came to this idea that my dyslexia wasn’t actually a burden — it was a gift because it made me look at the world differently.

As part of SHOWstudio’s coverage of INNERSECT, Editor-at-Large Lou Stoppard hosted a Live Panel Discussion focusing on the importance of creative collaboration. Stoppard was joined by a selection of SHOWstudio favourites and industry experts; No Vacancy Inn’s Tremaine Emory, Ambush’s Yoon Ahn, ALYX’s Matthew Williams and founder of INNERSECT himself, Edison Chen. Watch this line-up discuss the prevalence of collaborations within the street-culture and the increasing influence of music merging with fashion. 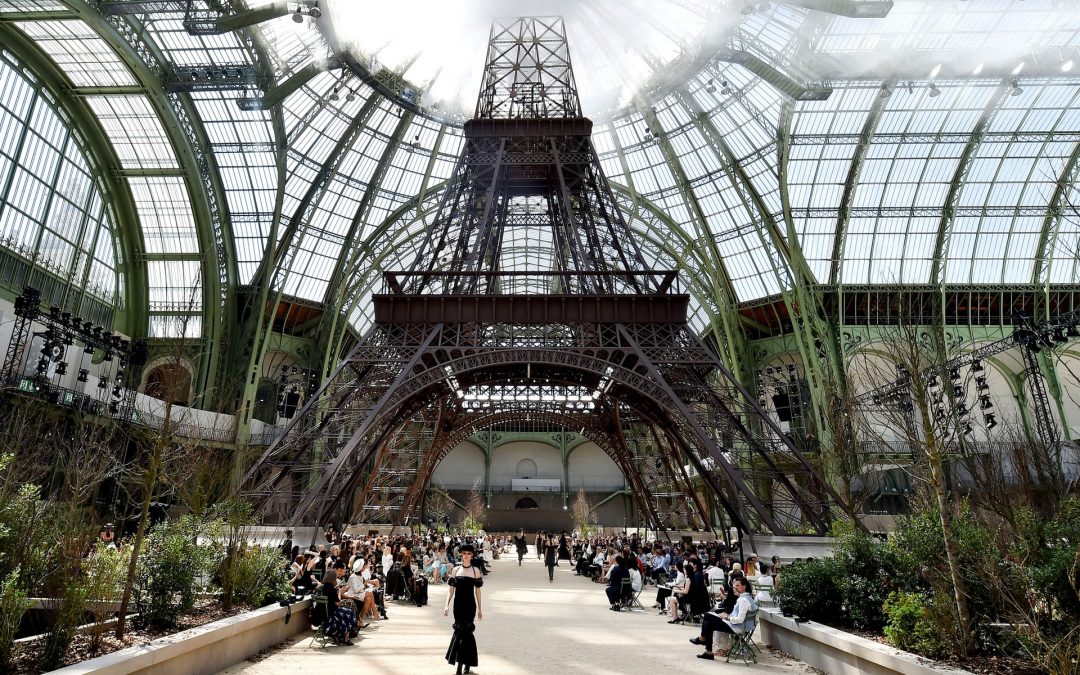 “I am a Foreigner”

It was a Chanel Haute Couture collection that was as finely engineered by Karl Lagerfeld and the skilled petites mains of the house’s legendary workrooms as the giant model of the Eiffel Tower that rose above the sand-and-gravel runway into a dry ice–misted sky in the highest reaches of the dome of the Grand Palais.
“I’m feeling very out of it,” confided a jet-lagged Katy Perry. “I wasn’t sure if they’d chopped down the Eiffel Tower for Karl!”
The city of Paris may not have gone that far, but after the show, the audience remained seated as Anne Hidalgo, the city’s dynamic mayor, did the next best thing and presented Karl with its highest honor, the Médaille Grand Vermeil de la Ville.
“To say that I was impressed is too weak a word,” said Hidalgo in her stirring presentation. “Your imagination is boundless, and your ability to transport us into a different universe. You are a universal person,” she added, “but you are also someone who makes Paris more beautiful and more creative. You are a Parisian.”
“I am a foreigner,” said Karl, pointedly, “and strangers see things through different eyes, with a detachment. Vive la France!” he added, “and above all, Vive Paris!” 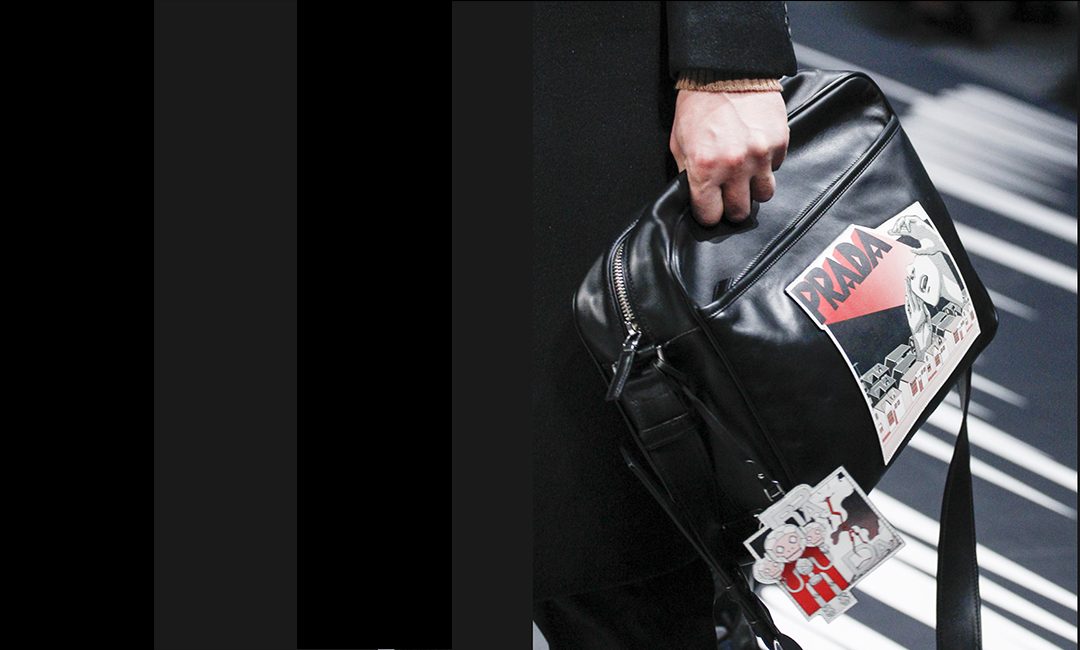 The Coming of Robots and the End of the World

According to Prada Men’s Wear Spring Summer 2018; the lonely, hollow ring accompanying the virtual noises ceaselessly sent into the ether, sounds without echoes: These were some of the unlikely themes linking a bunch of disparate designers here over the past week.

And — surprise! — philosophy and politics are of concern even to those who favor sling-back sneakers and satin for day.

Consider the case of Miuccia Prada, a designer whose sometimes banal efforts come dressed in big ideas. For her show on Sunday, she and her collaborators at Rem Koolhaas’s research and design studio, OMA, restructured and decorated the exhibition space at her headquarters with Ollie Schrauwen and James Jean’s large-scale illustration — rushing locomotives, giant ants from a ’50s horror movie, an ape beaming cosmic rays — inspired by graphic novels.

The stated theme was the urgency of narrative in the virtual age. “If storytelling is the root of all communication,” as the show notes said, “the manner in which we choose to tell them — abstract or complex or simple or direct — is significant.”

Ms. Prada’s métier dictates that hers is an image language. This is a challenge, since, in the stories she tells, translation is often required. There is a limit, of course, to how much one can read into a topcoat. That there were a number of these in herringbone, camel, bird’s eye tweed, in a show of summer men’s wear, was a tale all its own.

Perplexing in other ways were the trousers with high gathered paper-bag waists, vaguely emasculating short shorts, creepy Cliff Huxtable cardigans tucked into waistbands, fanny packs worn at the small of the back, shirts with popped collars reminiscent of Ming the Merciless. Blanche McCrary Boyd, a gifted novelist pal sometimes obliged, like most writers, to take on the occasional well-paying bit of journalism, used to joke of those pieces that they were “not for the collected works.”

You might say the same of Prada’s show on Sunday, were it not for the shirts and assorted garments ornamented with panels repeating the irresistible graphics drawn on the walls. Those were the collectibles, the surefire Prada moneymakers. In a certain sense, that’s all the story you need.