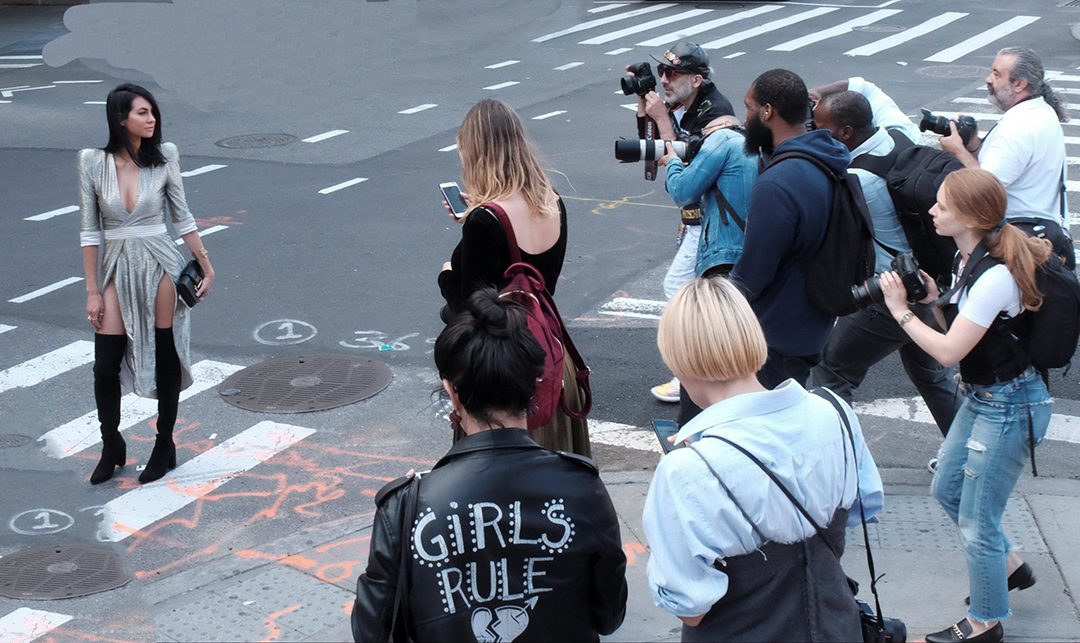 The Second Coolest Girl in the Room

Is your best customer.

What would fashion be without its alchemical ability to transform clothes into status?

For one thing, a great deal poorer. The endless trend cycle of products gaining and losing cool keeps fashion labels flush with cash as shoppers chase the next new thing.

The most striking expressions of new trends play out on designers’ runways and via the fashion influencers that crowd Instagram. But appealing to trend pioneers who are first to fresh territory isn’t necessarily the most lucrative position for a fashion brand counting on more timid customers to buy their wares. Not all brands—not most, in fact—can be the Guccis and Balenciagas of the world.

The internet and social media have sped up the endless comings and goings of trends, leaving the trendsetters soon feeling a look has become overexposed, and abandoning it as quickly as they picked it up. For labels aiming at more mainstream appeal, which can also mean bigger sales, the greater opportunity is often in appealing to a second wave of trend-adopters.

“In the past in my career, I’ve thought about trend as that curve. It’s kind of a whale shape. It goes up slowly, slowly, slowly, and then it peaks and drops down,” said Crystal Slattery, president of contemporary at Jaya Apparel Group and cofounder of all its contemporary brands, including Elizabeth and James, Cinq à Sept, and Likely. “Now what we’re seeing is almost like a camel.”

Slattery, speaking at a March 6 panel on how trends work today, hosted by Edited, a retail technology firm, meant a double-humped camel: The first wave of customers that comes and goes with a trend is now often followed by a second, larger and longer-lasting wave. “Those are our friends who are maybe not paying as close attention to trend and fashion,” she said. This audience may be less adventurous in how they dress, or require time to get comfortable with a trend before jumping in. But, she said, that’s where the bigger profits are to be made.

The other speakers included Yedidya Mesfin, design director at Blank NYC; Rob Lim, head of design at Saturdays NYC; and Chris Benz, creative director at Bill Blass, who said his label is also not exclusively focused on the early adopters.

Benz emphasized it’s more important than ever to have a clear brand identity, which lets the brand filter trends through that prism—again, because trends rise and fall so quickly these days. Bill Blass’s customer base tends to be part of that second wave. “I always talk about our customer as being not the coolest girl in the room, but she’s the second coolest girl,” he said. “She doesn’t want to be full-sequined-glitter-boot, but she wants a little glitter heel.”

The aim isn’t to offer an exact copy of the most outré version of the trend, which will likely lose its appeal for the more adventurous fashion customer by the time a mass-market label can design and produce its own version. Instead, brands try to keep the spirit of the trend while softening its cutting edge, to make it more accessible to a customer looking for something to wear to work or out in the evening.

The way Instagram and the internet have reshaped trends shows up in other ways too. Traditionally, trends trickled down from the runways or bubbled up from the streets, said Katie Smith, the retail analysis and insights director at Edited. But “a linear way of tracking trends just isn’t relevant anymore,” she pointed out.

Now there are simultaneous feedback loops happening among the runways, the street, and retail. It makes it harder to identify where a trend is in its life cycle, and it has upended the old model of trends beginning upmarket and migrating down as they spread into the mainstream. Luxury and fast fashion are often neck-and-neck, and their customers don’t behave much differently.

One of the biggest challenges in capitalizing on a trend, consequently, is knowing when to drop it. Abandon it too early, and you may miss the lucrative second wave. But because things move so quickly, brands also risk suddenly looking tragically outdated. As Slattery put it, “You hang on to it too long, and you’re Juicy Couture with the sweatpants.”

The article appeared first in quartzy.qz.com. 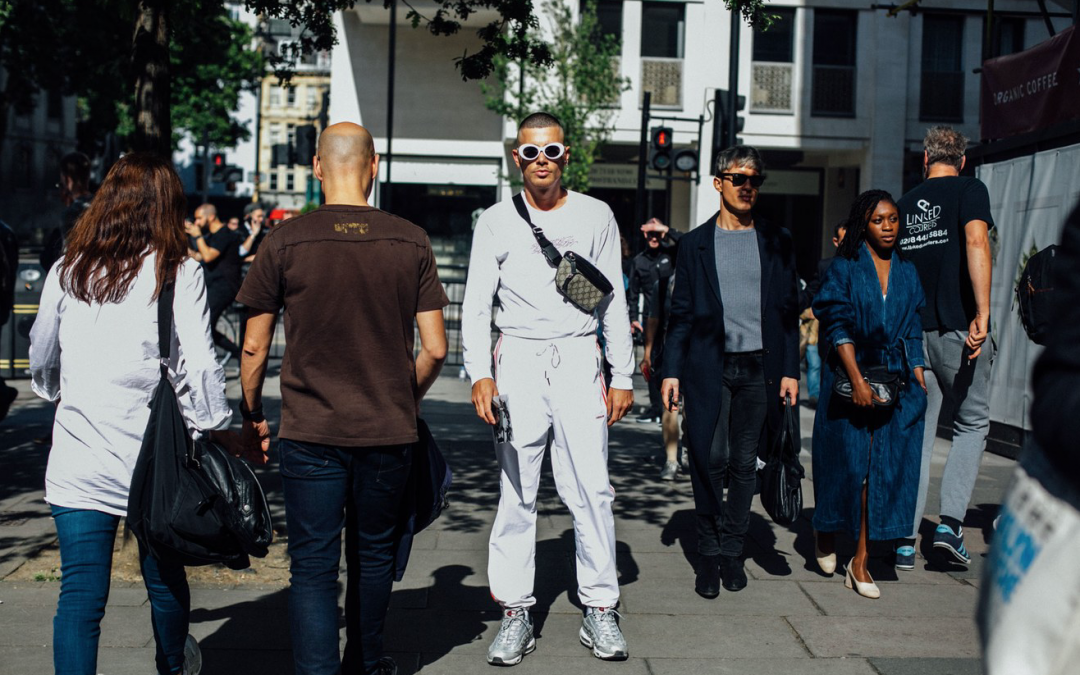 The Cross Body and Other Trends 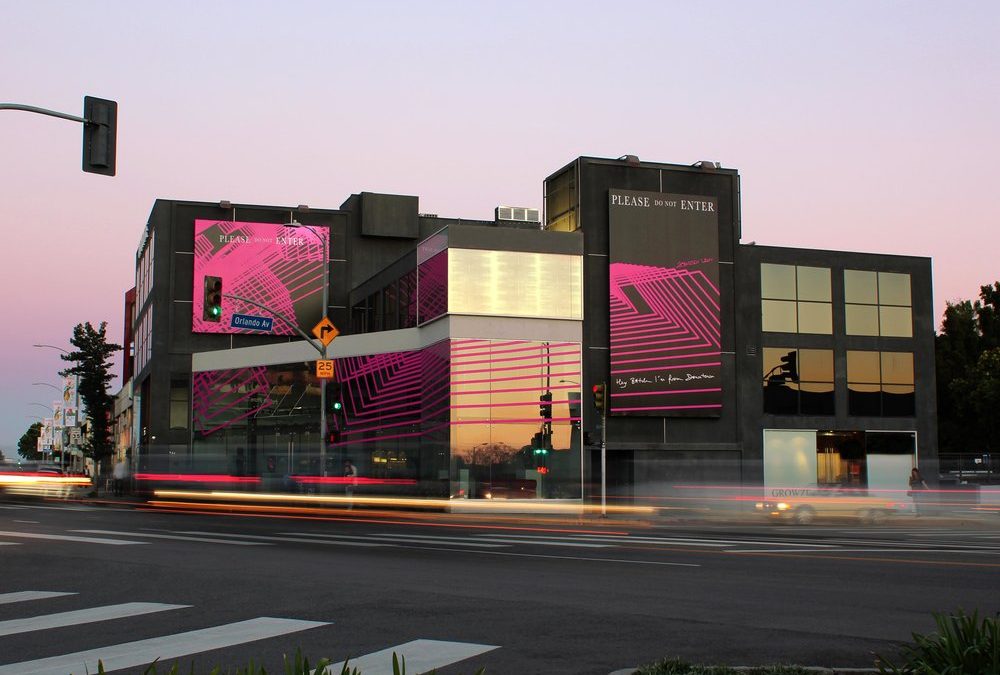 On March 22, PLEASE DO NOT ENTER’s “Boutique Ephémère” infuses a downtown Los Angeles twist to the West Hollywood landscape, through a bold graphic, musical and architectural installation by French LA-based artist Sébastien Léon, bringing a new sense of place to the iconic Melrose Avenue building, through graphics, sound, and light.

Léon’s intervention starts with the wrapping of both the entire facade and the two adjacent billboards, with his signature line art in bright pink. One of the billboards features the provocative statement, “Hey B*tch I’m From Downtown”, as an affirmation about the blossoming renaissance of the Downtown art and fashion scene, and the geographic origin of Please Do Not Enter. The installation continues with a multichannel sound installation which the artist composed in collaboration with sound designer Machine Head. The duo transforms the wood ceiling of the boutique into a soundboard, playing a cinematic soundscape inhabited by squeaking planks and flamenco steps. Léon adds a final touch by bathing the whole interior of the boutique with bright pink LED lighting, offering a vivid impression to both visitors and passersby. 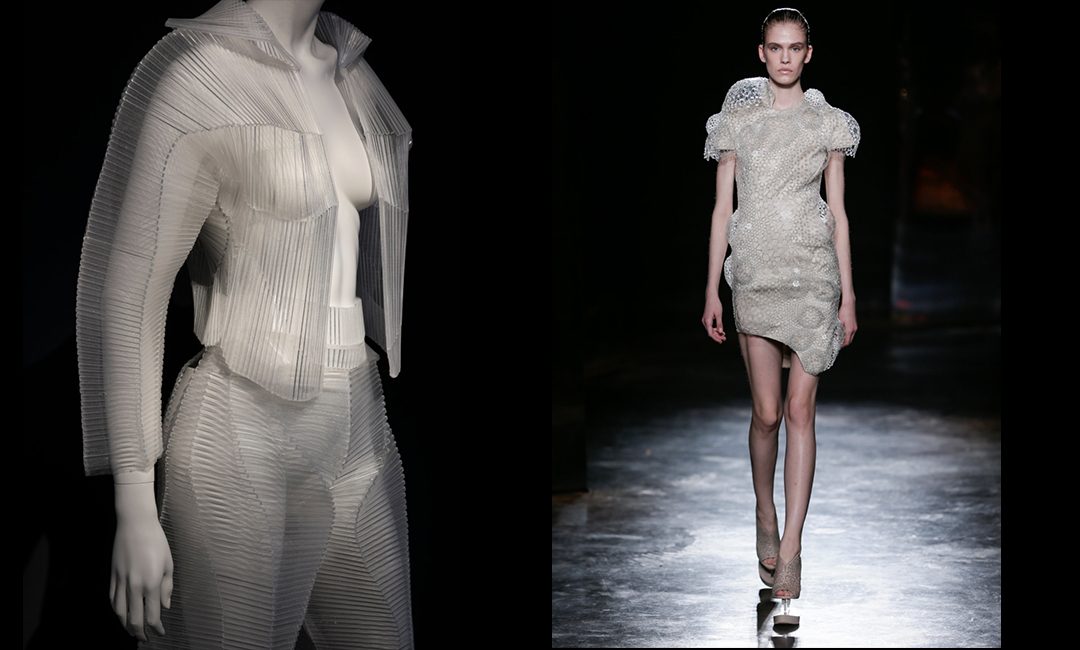 Pieces designed by Patrik Schumacher for an exhibition inspired by the work of the architect Zaha Hadid, who died in March. Credit Damian Griffiths/Courtesy of Maison Maison Non
The architect Zaha Hadid, who died unexpectedly in March, was known for her flamboyant and very personal fashion sense. While her architectural practice become famous for large-scale, soaring structures, like the opera house in Guangzhou, China, or the Maxxi museum in Rome, it has embraced fashion, jewelry design and household items with a similar fervor and spirit of innovation. “In terms of form, all our projects — architecture, fashion and furniture — interest me equally,” Ms. Hadid said in a 2015 interview.

Here are edited extracts from the conversations:

Patrik Schumacher
I teach at the design lab at the Architectural Association, and we have been working on texture-like materials to use in construction. But in our architectural designs, we have done origami-style curved folding. It’s a world of forms, more than anything, and then you seek customization. For the exhibition, I’ve designed a three-piece suit using neoprene and mesh because I want that elasticity and comfort. Instead of buttons, there are zippers, and the way the suit is constructed and layered is unconventional. At the same time, it is still recognizably a suit, elegant and very wearable, and you could go jogging after dinner without changing.

Krystyna Kozhoma
A design by Krystyna Kozhoma. Credit Damian Griffiths/Maison Maison Non
I saw a video about curved folding in architecture, and it inspired me to create clothes with programmed shapes. So I’ve embedded clear bars in the fabric of a jacket and trousers to create a structured shape. I worked with an engineer, and there was no pattern cutting; the clothes were made by a computer program. That’s still limited in fashion and mostly used for 3-D printing. This is a translation from architecture to fashion, and the shapes and fluidity of the lines show how much my work is inspired by Zaha. She took a lot of inspiration from nature but then computerized it. What’s interesting is that if the embedded material reacted to light, or temperature, you could make the garment a smart one. That’s the next project.

Iris van Herpen
From Iris van Herpen’s Lucid collection. Credit Iris Van Herpen Lucid Collection/AW16
I’m showing a dress from my Lucid collection that is built of thousands of small transparent pieces. They create a bubble or halo around the body, and around the dress we have built an installation of optical light feeds from thin, transparent sheets that bend the light. From each angle, you see the garment in a different perspective and with a sense of movement. For me, that reflects the future: uncertain and personal to each individual. I think Zaha’s work is a beautiful balance between the futuristic and the organic, and I tried to stay true to that balance.

Peter Do
Peter Do made a unisex coat, sweaters and boots. Credit Damian Griffiths/Courtesy of Maison Maison Non
I was thinking about minimizing one’s wardrobe and functionality, so I used a single yarn, made from cellophane, woven in many different ways, and made a unisex coat, sweaters and boots. Each looks different because of the way it is fabricated and layered. I worked with Stoll, a knitwear company in New York who make incredible knitting machines that can do extraordinary things. In the future, I think they’ll be much more simple to use, and I had this idea that everyone could have a Stoll machine at home, download your patterns, choose your yarns and your garment would be knitted by the time you got home from work.

Phoebe English
Phoebe English’s piece. Credit Damian Griffiths/Courtesy of Maison Maison Non
I realized, when I got the brief, that I felt a bit frightened of the future. So I designed an enclosure or private space, a kind of safety shell. It’s constructed from a heavily smocked textile with very closely packed pleating. It’s half calico and half plastic, so it has both a rawness and a sheen. I’ve always admired the shapes and forms of Zaha’s work; there is something about that fluid line that I feel has a strong feminine aesthetic. That has been a big influence on me. When people envisage future design, it often looks hard and polished and technological. I wanted something with a different vision.

Stephen Jones’s design. Credit Damian Griffiths/Courtesy of Maison Maison Non
Zaha was a client of mine, and I felt we had a similar approach. She made forms, constructions which relate to people, and I do the same thing as a milliner, but put them on people’s heads. She once gave me a sketch of a vortex that she had used as a design element in a restaurant in Sapporo, and I took that as my inspiration. My tribute to her is a red, spinning vortex hat over a stool she designed and a cushion made from the Issey Miyake pleated fabric she always wore. For me, it’s an idea of energy, speed and transformation. I love the idea that in the future you’ll put a magical hat on, and it will make you feel a certain way. 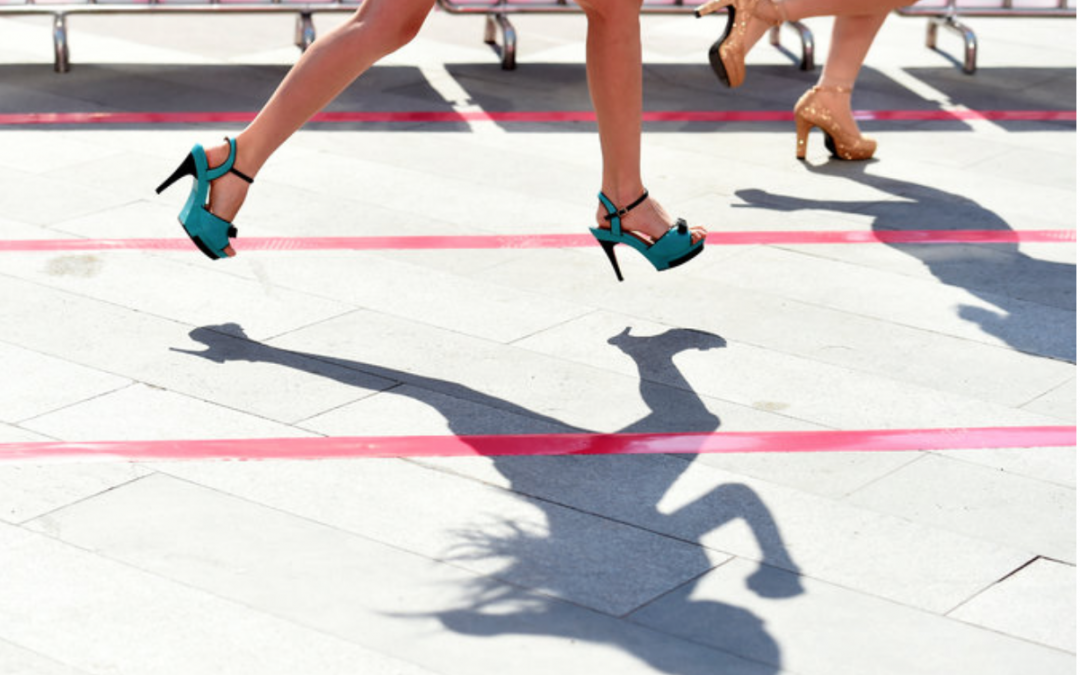 “When you wear high heels, you can’t go for a stroll,” he continued, using the Chinese term “sanbu,” considered an essential part of healthy living here. “You need a car. When you don’t have a car, you can’t wear high heels.” 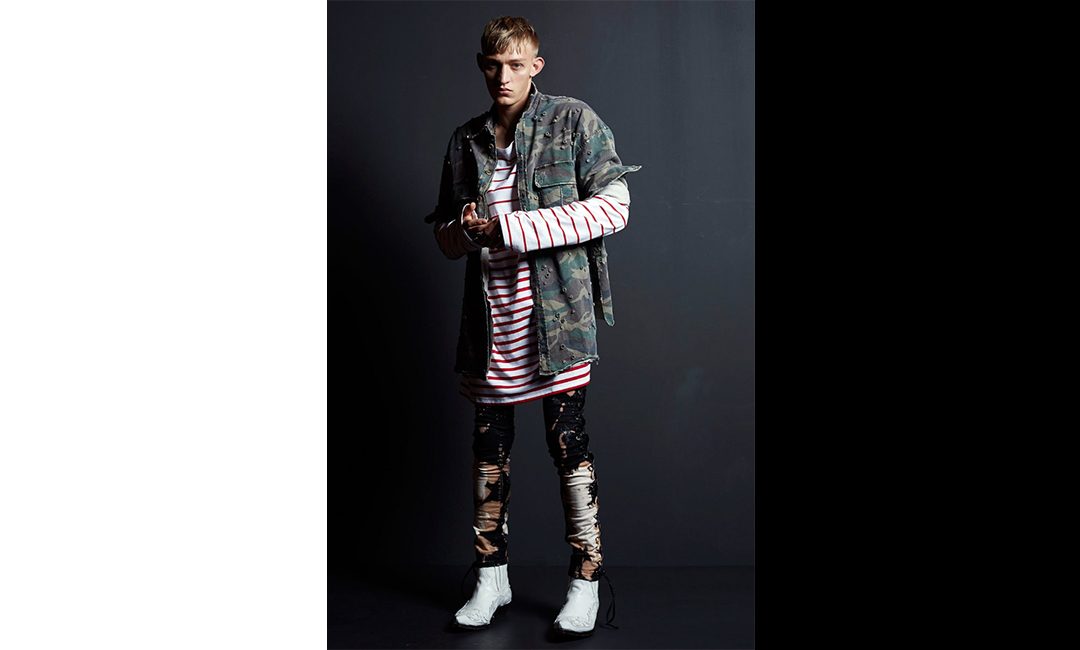